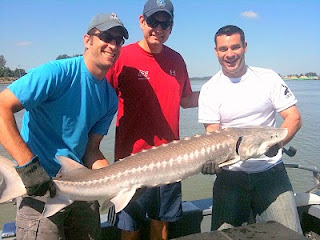 Yesterday was the first ever July event for the Fraser River Sturgeon Conservation Society. Normally their main fundraiser with us is in October but we have added a July date out of Vancouver which sounds like it went off awesome-ly! All reports were good- I still don’t know who won- I hope to find out that information later today! Here is a picture fishing around Annacis Island!

Did you ever hear the story of Mike waiting for his brother to come back from Lanagara Island? He was fishing beside the Flying Beaver Pub across from the South Terminal where his brother was going to come out. Mike thought all the float plane pilots were super friendly becaue they were all waving at him fishing beside the airstrip…. until the cops showed up. Apparently there’s no fishing beside the airstip, there’s a 10 inch sign posted on the bridge before the airstrip that says no fishing! Mike said it was pretty phenomenal fishing down there though! All the guides had lots of fish yesterday, and other than the traffic home- it was an awesome day! Thanks FRSCS and of course thanks to the Sturgeon who participated also!

By BC Sports Fishing Group 0 comments

« It’s Awesome when you can’t pick it up!
Fishing… Everywhere… »